The Transmigration Of Morton F. was commissioned by the Holland Festival and launched in June 2016 in Amsterdam. The full interactive work was available online until for a period of three years, ending in June 2019. The site consisted of an interactive experience with different layering, VR and role-playing.

The different chapters from the project are available on this site until June 2021.

Scene 3 – The Transmigration of Morton F. (A. Spiegel)

The worlds of opera, visual ritual and computer-gaming coalesce in The Transmigration of Morton F.. Commissioned by the Holland Festival, director Sjaron Minailo and composer Anat Spiegel’s creation is a fully digital music theatre performance to be experienced entirely on the internet. It is inspired by the works of science fiction writer Philip K. Dick (in particular The Transmigration of Timothy Archer), film director David Lynch, and composer Morton Feldman.

The opera consists of pieces composed by Morton Feldman and Anat Spiegel. Overture is Feldman’s The Straits of Magel­lan, which can be heard during the opening scene when the viewers meet the character La Barbara (who plays herself) up to her encounter with a mysterious boy who bears a striking resemblance to Feldman. After this overture the viewer, to­gether with La Barbara, enters various manifestations of her unconscious. Each scene is a visualisation of a short compo­sition by Feldman. The compositions also use The Straits of Magellan: Chorus and Instruments II, Vertical Thoughts V and Only. In addition, there is a new composition by Anat Spiegel. As she has previously done with pieces by Bach and Björk, Spiegel has made distorted mirror images of Feldman’s music. According to Spiegel, the new composition is an ‘incantation’ that evokes Feldman’s spirit. ‘Feldman reincarnated as con­temporary music.’ This scene also includes choreography by Nicole Beutler and a performance by Jennifer Tee.

The opening shot is a self-portrait of the American artist Philip Guston. He was Feldman’s best friend for years, until their friend- ship came to an abrupt end in 1970. Guston died ten years later, without them having reconciled their differences. Feldman always regretted the loss of the friendship. This incident is the driving force behind The Transmigration of Morton F. Then we see a boy, who bears a striking resemblance to Feldman, walking across a cemetery. In a subsequent shot he appears in a bookshop, where he briefly has eye contact with Joan La Barbara. Joan decides to follow the boy, following him to various locations, including the cemetery, a desolated water park, and a church where Joan bumps into herself while she is singing Feldman’s Three Voices to an audience. She also ends up at a mass ritual. An abstract expressionist painting in the spirit of Guston is created during the ritual. It is also a further step in the transmigration of Morton Feldman’s spirit (in the form of the boy) to La Barbara’s body. 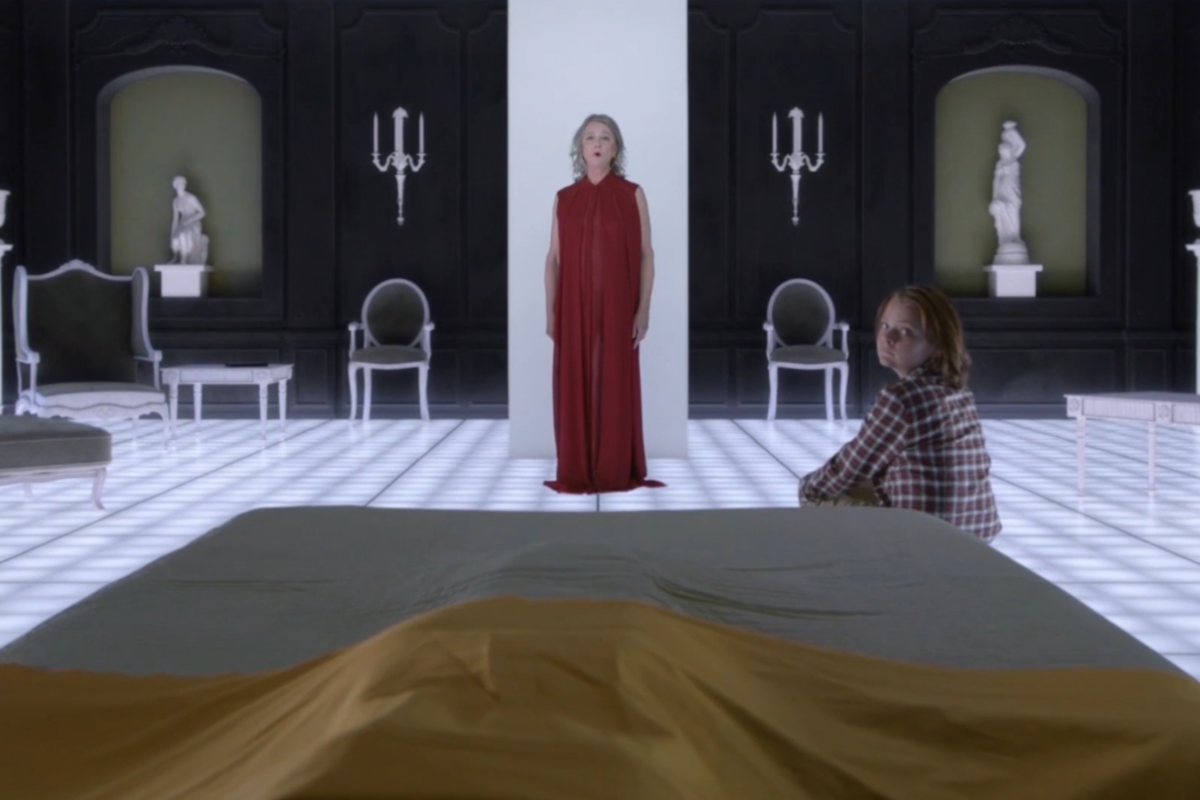